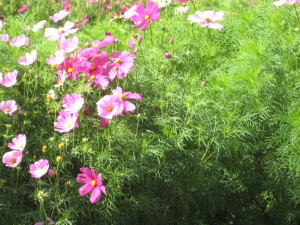 Flowers blooming only to be folded back into blood stained earth.

Me and the world and those ticking clocks; relentlessly ticking clocks.  Some clocks I care about; my husband’s, my daughter’s, my mother’s…you get the picture, and others, not so much. The woman who smirked at me when I asked what was pick up time from my daughter’s ACT exam.  In the moment, I’m hoping her clock ticks out pretty quick. Same with the guy on Facebook who remarked that saying “I don’t give a shit” in a particular situation was poignant…really?  Shit and poignant in the same sentence? Shit, maybe he’s right, and it is it a good fit since it remains in my brain, taking up space with the tick tock, tick tock.

Tick tock cells, do your thing.